Dhanashree find her place in the sun at Slum Soccer's D/DeafKidz tournament.

The game of football is commonly known as ‘People’s Game’ not just because it is the most popular game played and watched by millions across the world; but also because it has proven to be a game that has, in myriad ways, changed lives by virtue of being a tool for healing, unifying and teaching. 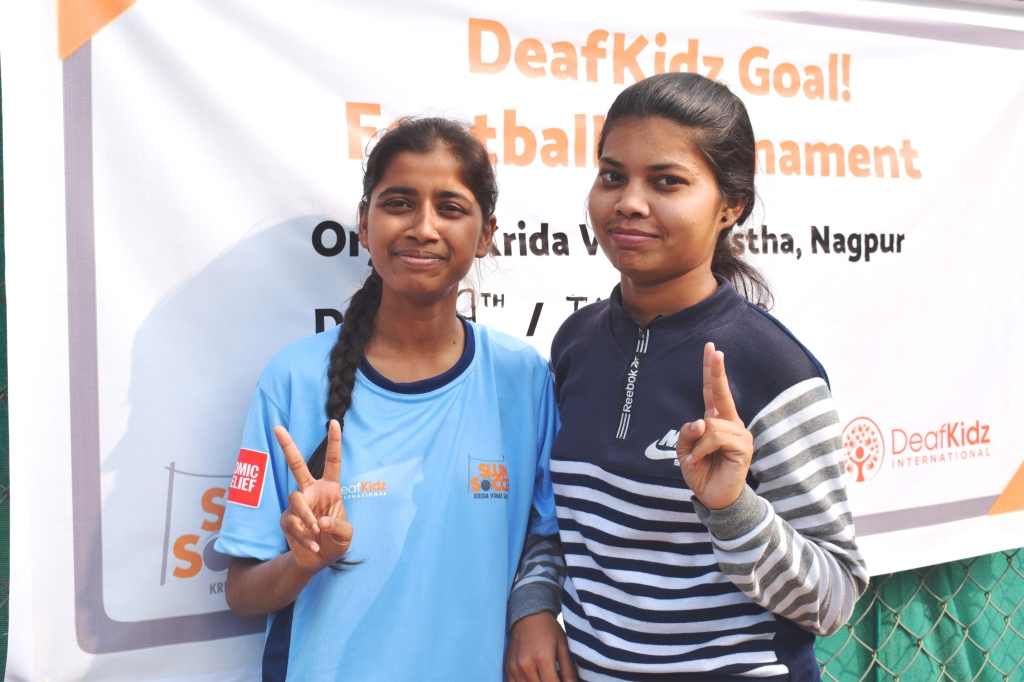 On 9th January, 2020, Slum Soccer organized the DeafKidz Football Tournament. The aim of the tournament was to integrate Deaf children and youth with their hearing counterparts, boost the confidence of D/Deaf to participate in mainstream events towards creating an inclusive society. 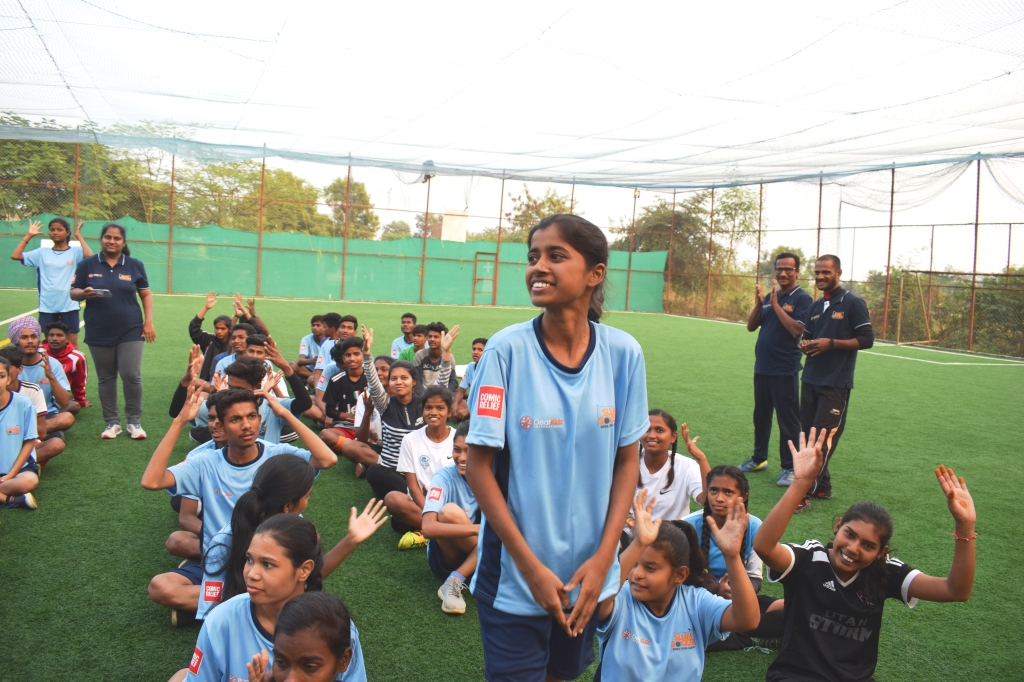 Dhanashree(a 10th Standard student) was just one amongst the 50 students of Deaf School, Shankarnagar who were invited to participate in a football tournament. It was her first time and she was as clueless as she was agog with the excitement of what lay in store. As her bus entered the gates of Slum Soccer premises, the green of the Diversity Pitch grass took her breath away. (Her amazement at discovering that it was artificial turf and many other such small, yet precious, discoveries and experiences are stuff enough for another story.) Any apprehensions she had were blown away as she walked through the welcome arch formed by outstretched arms of smiling coaches, staff and youngsters from Slum Soccer interventional communities. Amongst the welcoming party, she recognized coaches who came to her school to teach them football under the DeafKidsGoal !program. It may be mentioned that Slum Soccer is implementing its innovative DeafKidz Goal! Project at the Deaf School,Shankar Nagar(and Saoner too) with the support of DeafKidz International and Comic Relief.

Radhika, a final year B.Sc(Bio-Tech) student and a participant from Slum Soccer’s Dipti Signal Community Centre, Nagpur was a part of the hearing youth group invited to engage with the D/Deaf students over a game of football. 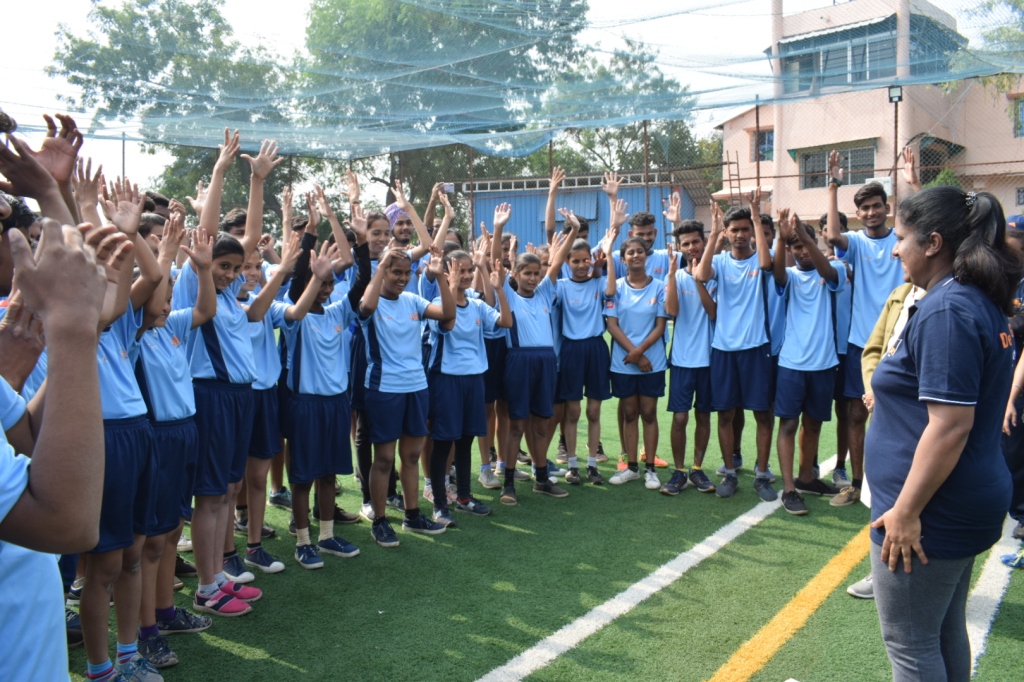 The Slum Soccer faculty had designed an innovative format and set of rules to provide a safe space and a level-playing field for D/Deaf and hearing to play as a team. However, to gauge its efficacy and success, the format and rules were kept a secret. So, the D/Deaf group as well as their hearing counterparts had arrived at the venue with an impression that it was going to be just another practice game with their co-players. Imagine their awe and amazement when they discovered that they were divided into teams having boys and girls, both D/Deaf and hearing. 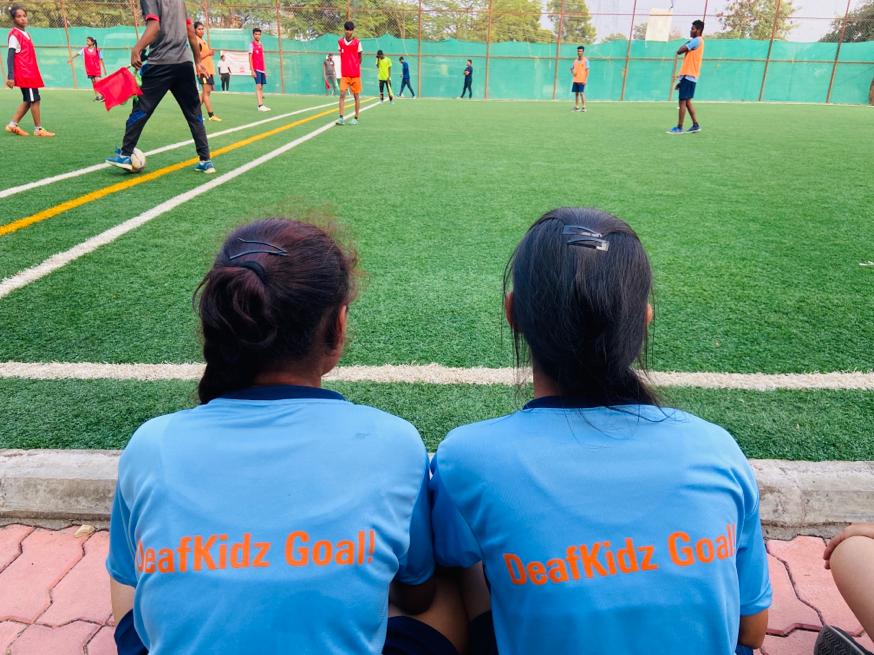 By an act of providence, both Dhanashree and Radhika were assigned to the same team. The organizers had no inkling that they were putting together in the same team a D/Deaf who was very expressive and sensitive alongside, a hearing youngster who was one of the most inquisitive and communicative in the hearing group. 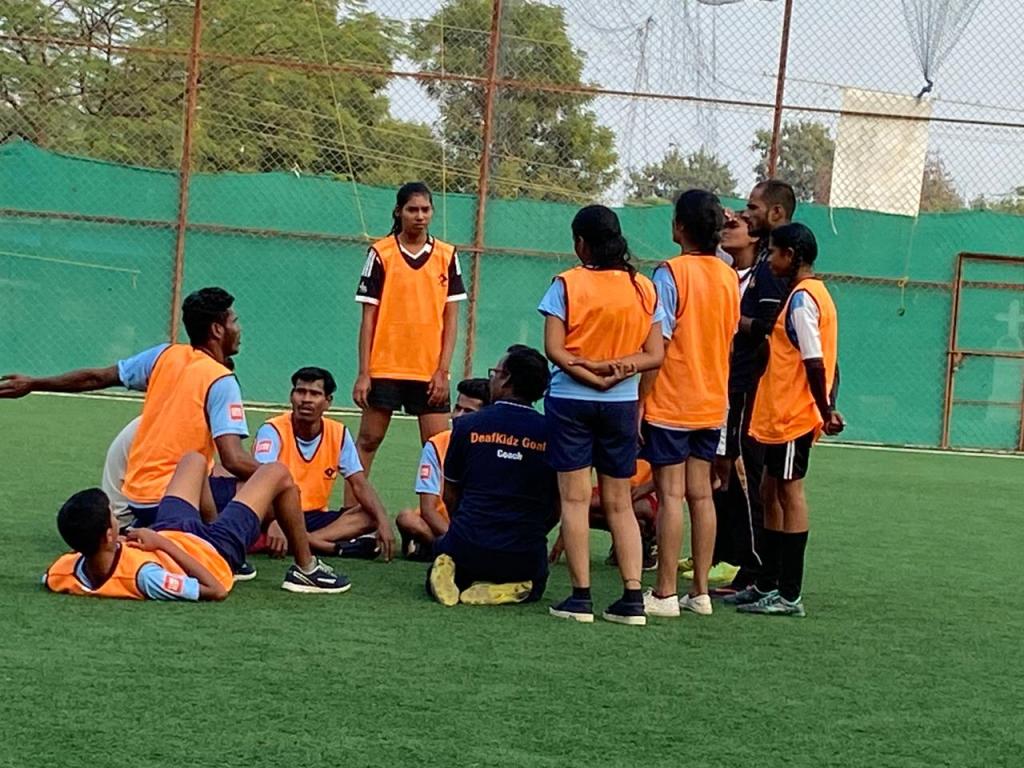 The format provided a short ice-breaker session where players were supposed to gel and introduce themselves. It started with the coach, a novice in Indian Sign Language (ISL) himself, asking them to tell their names. What followed was a flurry of mime and scrawling on the hands as both groups struggled to get acquainted. To ease the situation, a small white board and marker was introduced and soon enough a language of sorts developed between the team mates exchanging enough, age, educational qualifications, home town, hobbies etc were being exchanged. It turned out that Dhanashree was the most inquisitive amongst D/Deaf and was matched by Radhika question-to-question from the hearing group. Perhaps, that is when, and because of their inquisitive and friendly nature, they got along like a house on fire and an unspoken bond started to develop between the two, notwithstanding the difference in their age, educational and family backgrounds. 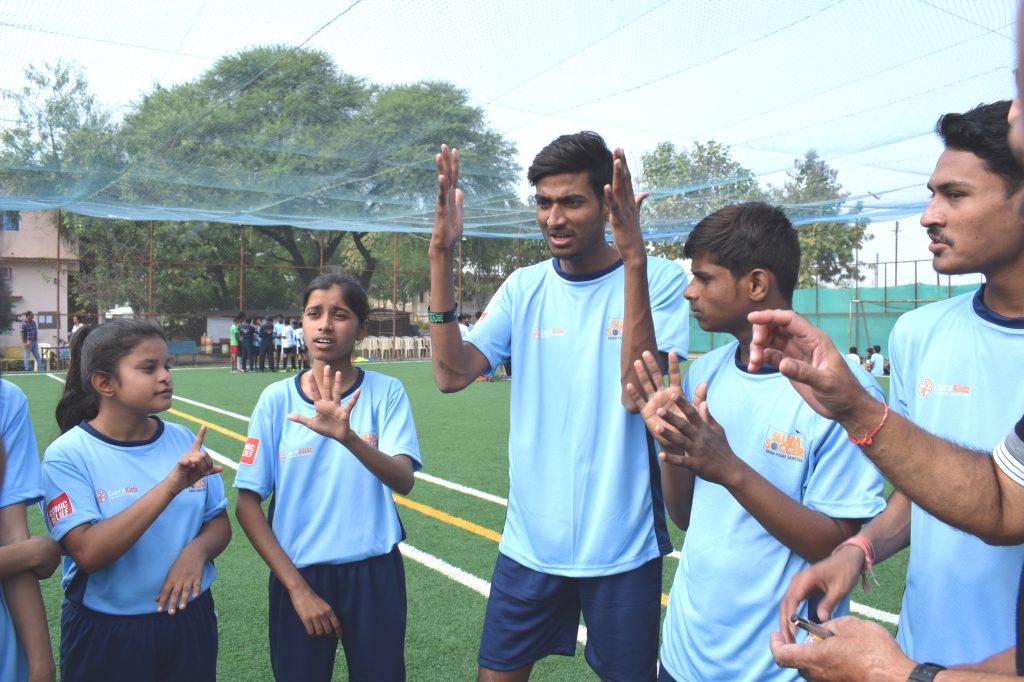 Soon, it was match time. Obviously, the exchanges between the two should have ended there and football should have taken centre-stage what with their inability to communicate effectively turning out to be the biggest hurdle in their attempts to nurture and strengthen the fledgling bond of friendship.However, something indescribable had happened between the two during the ice-breaking session, their hearts had joined and they had become close friends. The only way they could be separated was by sending them on the field to play. Oblivious of the wonderful and exciting display of football, the rest of the time was spent by the two on the sidelines with Dhanashree teaching Radhika ISL for words and expressions in common usage.

Soon, Radhika’s hands were green with rubbing off one question after another. Even as shadows started lengthening on the Diversity Pitch, the ISL masterclass continued with a lot of personal information, thoughts, ideas and views getting exchanged between the two. Results of the football matches did not matter to them; nor the presence of a hundred spectators around them. The world around them had ceased to exist; it was just them and their desire to continue to teaching learning to communicate in a common language. This was an outcome not anticipated in the wildest imagination of the tournament organizers.

Before long, their heartwarming camaraderie and bonhomie came to notice of Principal and teachers of Deaf School as well as Slum Soccer coaches. Quick on the uptake, they decided to award Dhanashree with a special award for her unceasing efforts to propagate inclusiveness by teaching ISL.

Soon it was time to say good-bye. A flurry of hugs and handshakes ensued. Radhika accompanied Dhanashree to her bus. On finding her returning wistful and pensive, her coach asked if everything was fine. Radhika replied, “Sir, I just learnt the ISL equivalent of ‘I’ll miss you till we meet again.’” 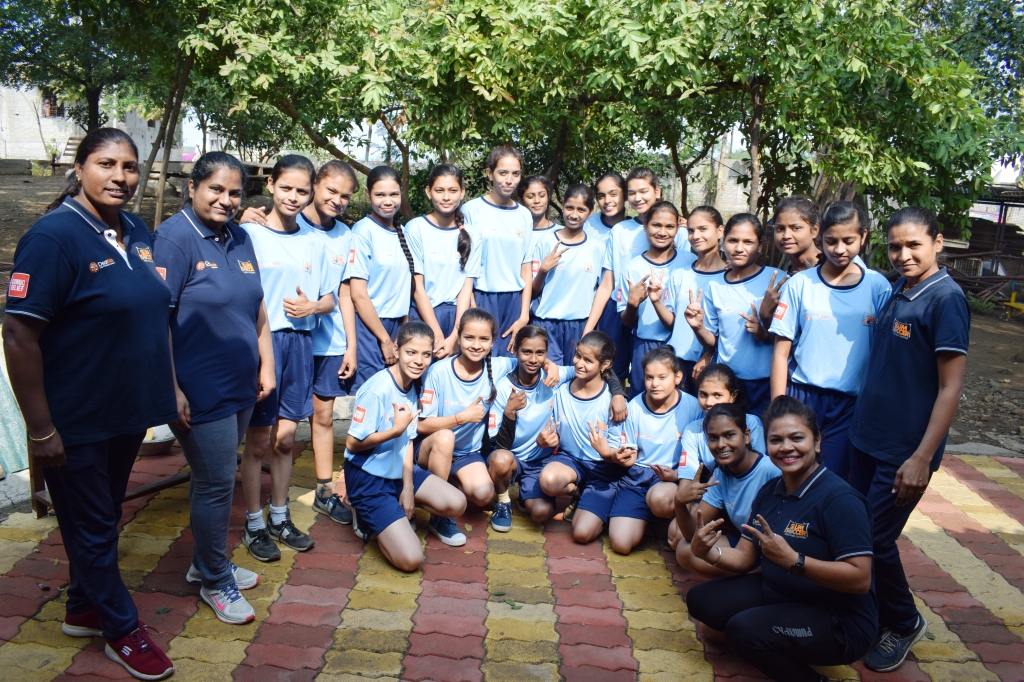 As the bus hurtled along the dusty road under construction, Dhanashree, with the award clutched in her hand, ruminated on the day’s events. She had gone for a football tournament and was returning without scoring a goal. But she had found a goal in her life – to become a teacher of 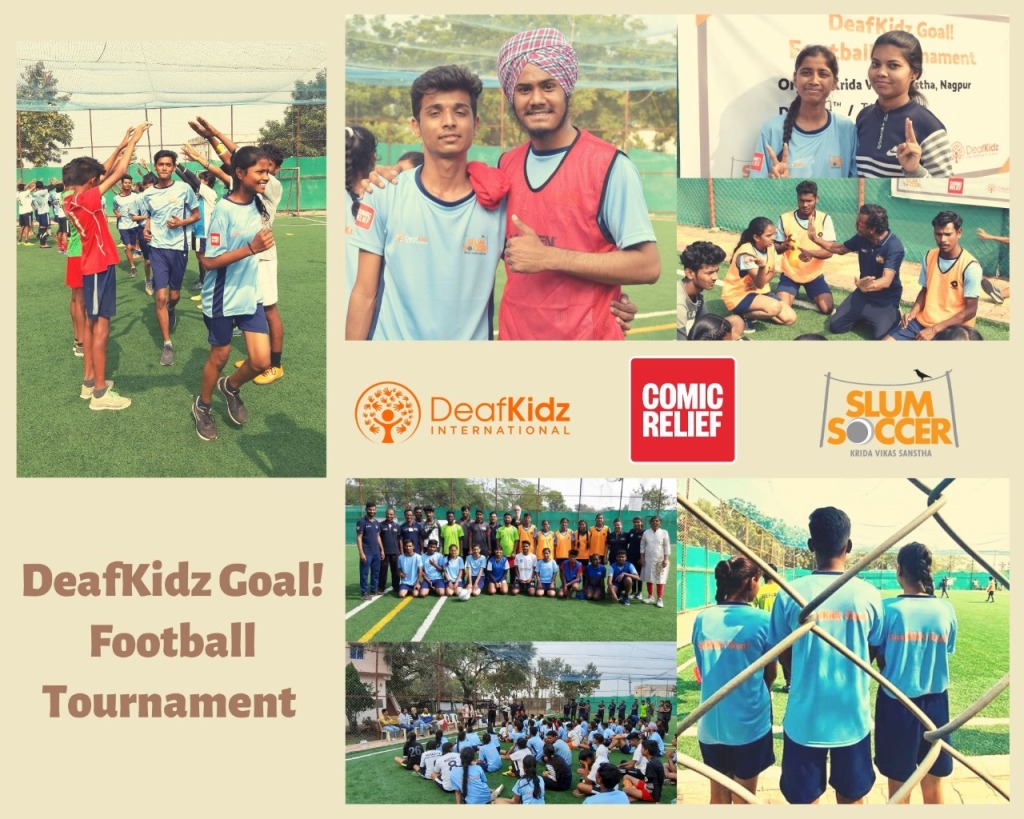 ISL. What’s more, she had found a friend for life.

And football had, once again, proven its worth – this time as a communication enabler.