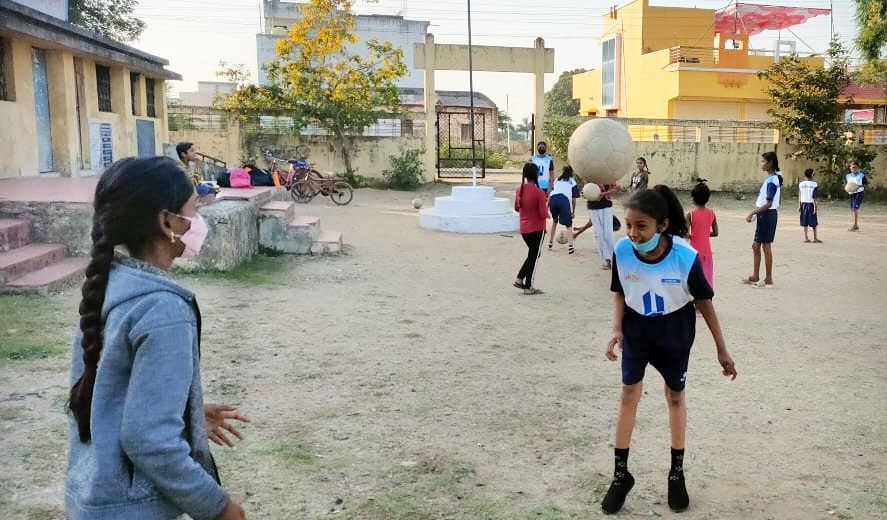 Swarna Warthi is one of the members of the Shakti Girls project in the Chicholi community in Nagpur who continually sets standards that the other girls strive to meet! But Swarna’ journey to becoming one of the top performers inH Shakti Girls has not been an easy one. Her father, Raju Warthi, is a machine operator who doesn’t have any fixed source of income and has to keep moving from one temporary engagement to another, in order to provide for the family. Swarna’s mother is a house-wife.

Swarna is a 6th standard student in Maharashtra Vidyalaya in Khaperkheda, Nagpur. Apart from going to school, she has to help her mother with house-hold chores and also take care of her younger brother. When the Slum Soccer coaches were planning to start the community football training at Chicholi, they had visited Swarna and asked her whether she wanted to play football. Initially, she had a blank expression on her face – this was the first time she had heard the word ‘football’! Once the Slum Soccer coaches explained the basics of football, Swarna was eager to participate and agreed to attend the training session. Later, when she did not turn up for training we tried to find out why and discovered that she had been busy helping her mother at home and looking after her brother. Also, and perhaps more pertinently, her mother was not keen to let Swarna play football. At that time, we did not want to put any pressure on Swarna and told her she could drop by for a training session whenever she found time.

We started conducting training sessions at Chicholi and for many days there was no sign of Swarna. Finally, one day we saw her passing by the ground while a session was ongoing. We stopped her and asked her if she wanted to play with the participants in the training session for some time. Swarna was intrigued and eager to try her hand (or, should we say, foot!) at football, but we could sense her hesitancy. Her mother was waiting at home for her and she didn’t want to be late. Not wanting to lose this opportunity, we suggested that she could play for 5-10 minutes before heading home, and she agreed. That was her first day at the Slum Soccer training session. Before she left, we asked her if she enjoyed herself. With a broad smile lighting up her face, she replied, “I really enjoyed a lot”. Having gotten a taste of football, she was now hooked! She resolved to talk to her mother and convince her to let her attend the training sessions. But there was another challenge. As the elder sibling, Swarna was responsible for her younger brother and would need someone to care for him when she attended the training sessions. We told her that she could bring him along with her to the training session and he would be looked after. That was all the motivation she needed to join the training session.

Since then, Swarna has become a regular at the sessions and always participates with boundless energy and enthusiasm; putting in an incredible amount of effort every day. Such is her passion for the game that she has also started playing football at home with her brother. If you ask her about football now, a word and a world she didn’t even know about some time back, she says, “Nobody can separate me from football”. Seeing her commitment and talent, we feel certain that she has a bright future in the sport and can make herself and her parents proud. We got a small glimpses of that future football when she competed in her first ever football tournament, the “Shakti-League” which was held in December 2021. Swarna scored all the goals for her team and was the only girl in the tournament to do so. Outside of football, Swarna wants to become a teacher. We have no doubt that this passionate and talented ‘Shakti Girl’ can achieve whatever goal she sets for herself and cannot wait to see what the future holds for her!

Shakti Girls-Beyond Boundaries is designed help girls from rural communities of Nagpur overcome trauma and dispel myths and provide opportunities to participate in sports and other mainstream acticities that are constrained and dominated by men.