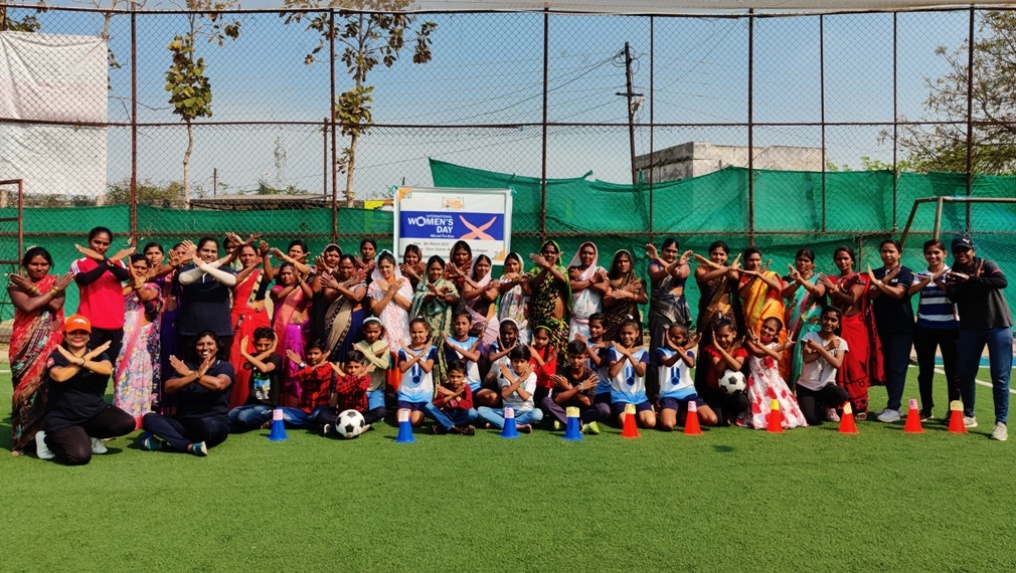 International Women’s Day, marked annually on March 8th, is a day for celebrating the social, economic, cultural and political achievements of women. The day also marks a call to action for accelerating gender parity and raising awareness about the equality of women.

The campaign theme for International Women’s Day 2022 was #BreakTheBias. Whether deliberate or unconscious, bias makes it difficult for women to move ahead. Knowing that bias exists isn’t enough. Action is needed to level the playing field.

At Slum Soccer, through projects like Shakti Girls, Community impact program, we have always strived to break the bias and empower our women to be leaders of the future. Although, we believe, every day should be Women’s Day, we celebrated this special day with some special women, the mothers of our participants from various projects and communities of Nagpur.

The event was conducted in the Slum Soccer Academy at the diversity pitch, Nagpur and it saw participation of 24 women, who were aged 35+ from two nearby communities of Nagpur.

The day started with the welcoming of these ladies followed by the introductions through a game where the women had to stand in a circle and one of them would stand in the middle, who would go towards any other woman in the circle, tap her. Then that woman would have to say her name and go to the middle and the first woman would take her place.  Similarly, all of them could say their names, their favorites, etc, and while they would go from the center towards the side, they could move on one leg, dance, clap their hands or do something creative.

They played several other games which included Chain Chain, balloon race and communication line, all of which we used to play in our childhood. This was an attempt to make the women relive their childhood and make them feel good on this special day.

Finally, they were asked about menstruation and each of them had to write about the restrictions they face at home during their periods. These were written on sticky notes and pasted on markers. The coaches then explained to the women how these biases should be broken and they should not follow things blindly. They were asked to hit the markers with the sticky notes, with a football and break it thereby signifying, breaking the bias. While doing so, they had to also say it out loud that they were not being allowed to do a particular activity but now they will do it. And they will also teach their daughters to not follow unnecessary biases.

Discrimination against menstruating women is widespread in India, where periods have long been taboo and considered impure. They are often excluded from social and religious events, denied entry into temples/shrines, and even kept out of kitchens. At Slum Soccer, our goal is to ensure that no girl feels left behind and for this , we have been conducting menstrual hygiene workshops for the participants and these girls go back to their homes and also make their family understand and thereby help raise awareness in their community to remove this stigma. We understand that this is a deep rooted stigma and we have a long way to go, but we believe that every small step matters and the step this women’s day  was to talk about the biases and make the women realize about the effect of these.

After the games, the felicitation ceremony was held where all of them were thanked for attending the event and gifts and snacks were distributed. The women were asked to share their experiences of the event to which they expressed their heartfelt gratitude and said that they became nostalgic and were reminded of their childhood while playing the games. They also said that they would love to be a part of such events in the future as well, they played, enjoyed and learnt as well. They appreciated the efforts of the coaches that they took to indulge them and also spread awareness against the biases of the society.

IWD is about women’s equality in all its forms. For some, IWD is about fighting for women’s rights. For others, IWD is about reinforcing key commitments, while for some IWD is about celebrating success. And for others, IWD means festive gatherings and parties. No matter what the underlying motivation is, but mainly IWD is about empowering women and that’s what Slum Soccer has always been imparting through its initiatives.