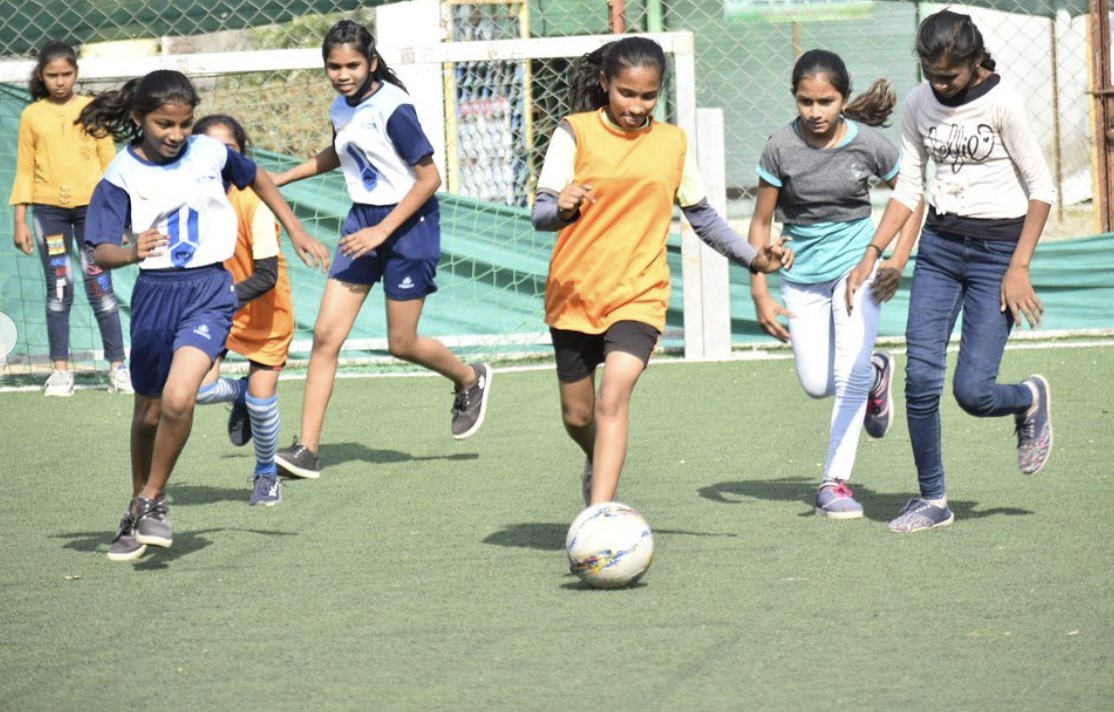 Hailing from various villages in and around Nagpur with diverse backgrounds, the Shakti Girls participants have had to overcome a myriad of obstacles to be here, playing for the most coveted “Equality Cup” which was held on March 29th, 2022 at Slum Soccer’s Bokhara center turf. The participants were all adolescent girls aged between 10 to 18 years from underprivileged communities.

Through the tournament, close to 250 participants got the opportunity to showcase their football talent and engage enthusiastically with other players, supporting each other in a safe environment. The tournament, played in a 5-a-side format with a total of 18 teams, hailing from 15 different communities. The teams were divided into 4 Groups of 5 and 4 teams with each team playing the other in their group competing for semifinals.

The group games were a competitive affair, as there were only 4 spots in the semi finals for the winner of each group. From group A, Dipti signal was a clear winner with 4 wins and an overall score of 12 points. From group B, Yerkheda won 3 matches gathering 10 points for themselves and securing their place in the semi finals. From group C, Bokhara and Bailwada competed neck to neck to have a tie at 9 points winning 3 matches each, however Bokhara qualified for the semis as they had an added advantage of a greater goal difference within their group. From group D, Bhandewadi B won 2 matches with an overall score of 7 points. All teams played really well and the 4 teams proceeded to play in the semi finals with great zeal.

The first semi-final was fought between Dipti Signal and Bokhara, both teams played enthusiastically and tried to score goals against the other one. Towards the end of the match, Bokhara came out to be the winner with 1-0 securing the first place in the finals round. Yerkheda and Bhandewadi came in front of each other for the second semi-final round where Bhandewadi had the clear upper hand and won with a score of 3 to 1, moving ahead to be the second finalist of the season.

The most awaited final match of the tournament happened between Dipti Signal A and Bhandewadi B FC. In the final and most important match of the day, both the teams displayed great zeal and a spirit of sportsmanship while they attacked to score goals and achieve an upper hand. However, till the end of the match, neither team was able to score a goal as they defended to the best of their ability. At an impasse after the second half, their fate was meant to be decided by a penalty shoot. During the penalty shoots, team Bhandewadi B FC showed great determination to win and take the cup home scoring 2-1 in favor of Bhandewadi. As they shot their last goal, emerging as the winner of the tournament, the team burst into laughter and excitement, celebrating after an excruciating day at the field.

The Shakti Girls program aims to empower the participants, impart knowledge of life skills and help them build confidence, hence improving their decision making abilities. During impromptu conversations with the participants, we realized that the program has been a great success in changing these girls’ lives and making them more responsible towards the decisions they make in life. Most of the participants initially had issues with parents and society allowing them to play football (given that it is considered a sport for boys), however the Slum Soccer team has done an amazing job at convincing their parents and training these girls well to play professional football. Participants also shared that the Menstrual Health Management program has helped them immensely in gaining knowledge about menstrual hygiene and breaking down myths that surround menstruation in rural India, where it is still considered a taboo. While significant strides have been made in the right direction, a lot still remains to be achieved. In some cases, the parents of these participants still forbid them to do basic household chores and visit religious places during their periods.

During the afternoon, the 14+ year old participants attended a session of MHM, learning about menstrual hygiene and how to better navigate life during periods. For the younger participants, to distract themselves during the waiting time under the scorching heat, the girls also engaged in singing and dancing to have a joyful time, increasing engagement amongst the participants and adding more enthusiasm to an already competitive environment. The participants got a chance to connect with each other, share their troubles as well as their dreams. The girls showcased their talents, talked about their hobbies of singing, dancing, arts and crafts, reading and writing, sharing their dreams of higher studies and a brighter future ahead of them. Even when their parents persuade them to marry at an early age, the program and community they have formed as a part of Slum Soccer have empowered them to take a stand for themselves and share what they really want to achieve in life. The girls told us how their coaches have taught them important lessons on communication, confidence, teamwork and social issues. Apart from this, they have made a lot of new friends while being associated with the project and football is something which acts as a connector between the girls from the different communities.

The closing ceremony followed the final match in the evening of Mar 29, 2022.  It was attended by the Slum Soccer staff and coaches along with the management interns from S.P. Jain Institute of Management & Research. The participants felt overjoyed and enthusiastic till the end of the ceremony, celebrating their wins and the opportunity they got to spend a day playing and connecting together with their peers. While Bhandewadi A/B FC emerged as the winner of the tournament and took the Equality Cup home, Dipti Signal A/B came out to be the runner up and Yerkheda FC was given the fair play award for the sport ethic shown by the team during the matches.

Closing the event, the participants thanked the Slum Soccer team for their support and hospitality, while coach Shiba Markas shared her wise words as closing note, “We strongly believe in developing girls, and this tournament is a great example of how and what height they can achieve. I would like to encourage everyone to support and encourage girls not only on the field but also when they are at school, home, etc. ”.